CHARTERS TO REMEMBER: THE FINE LINE

In late 2012 Air Charter Service was called upon to retrieve a Sea King helicopter that was left stranded on top of a mountain in the Arctic Circle.https://aircharterservice-globalcontent-live.cphostaccess.com/images/news/mi26-edit-new_tcm36-7864.jpg 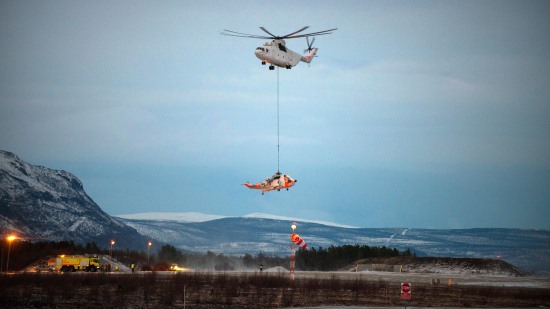 In late 2012 Air Charter Service was called upon to retrieve a Sea King helicopter that was left stranded on top of a mountain in the Arctic Circle, after a heavy landing damaged the undercarriage, meaning that it was not safe for it to fly back to its base.

Justin Lancaster, Group Cargo Director, explains: “We received a call saying that the helicopter was on a training exercise and had experienced a rough landing. The nearest road was more than 4 miles away and the only way to retrieve it was to airlift it out. The Sea King weighs around 6.5 tonnes, so we quickly decided that the best solution was a larger helicopter. We sourced the nearest Mil 26, which happened to be in Arkhangelsk in Russia, and positioned it into the nearby base. Mil 26s are the world’s largest and most powerful series-produced helicopter and are capable of lifting more than 20 tonnes.”

At the base meticulous planning went into the rescue operation. The Sea King was on a plateau at the top of a mountain and a small crew went up to the helicopter, via snowmobiles, to check whether it was safe for the Mil 26 to land next to it, or whether it would have to hover above it whilst the Sea King was strapped down.

“As can be seen from the photos, it was a tricky load, but the careful planning that we put in really paid off and resulted in a very smooth operation that only lasted one hour in total”, commented Lancaster.

SELECT UP TO MORE -

YOUR SELECTED AIRCRAFT ARE READY TO COMPARE